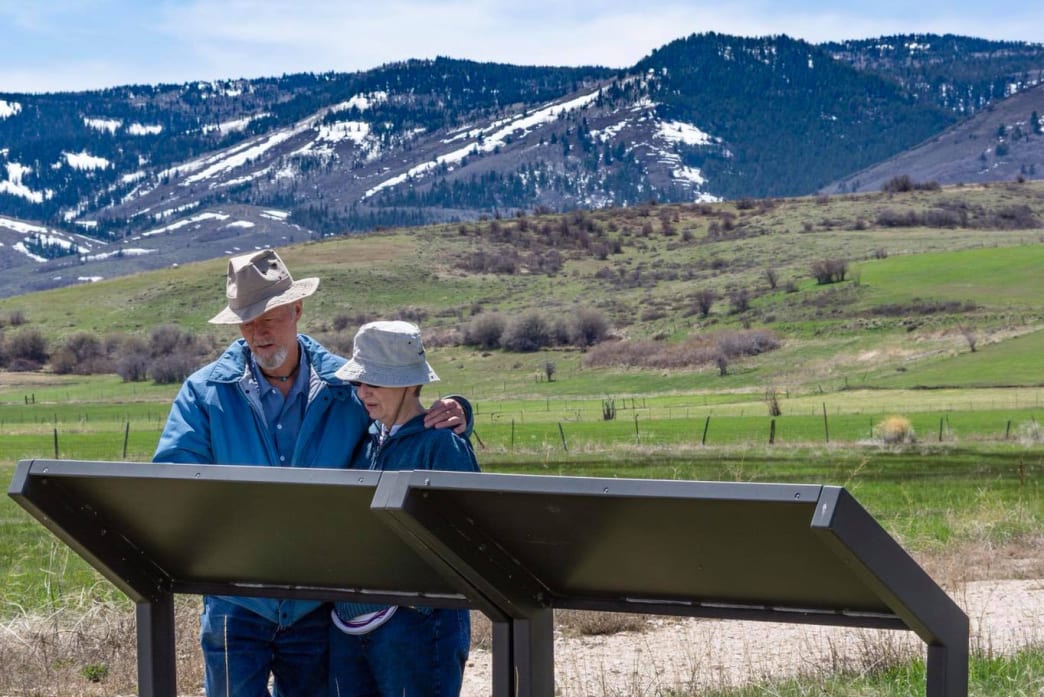 Dramatic landscapes crisscrossed by the Oregon and California Trails. A raucous, early 19th-century shindig among fur trappers and Native Americans. A bank heist by one of the West’s most notorious criminals. Straddling the Utah and Idaho border, Bear Lake Valley boasts an incredible history that’s just waiting to be explored by modern-day visitors. From the early days of the hardscrabble era of fur trading to the Mormon settlements, several of which are still visible today, this unique region is a living testament to the trials and triumphs of previous generations.

When you drive around the valley, you’ll soon see how its rugged landscape—rising from turquoise-tinted Bear Lake to its jagged mountains—has shaped generations of people in this region. Here’s a look back at the fascinating history of Bear Lake Valley—and ways you can experience it today.

Native Americans called the fertile Bear Lake Valley home for more than 12,000 years, settling along the shores of the massive lake and moving seasonally in search of game and edible plants in the surrounding mountains and lush wetlands north of the lake. These early inhabitants gathered plants to store for the long winter and caught fish and waterfowl in the abundant lakes, rivers, and streams. They hunted rabbits, deer, bison, and the fleet-footed pronghorn antelope on the open range, thriving by migrating between Bear Lake and the Great Salt Lake Valley to the west. Tribes including the Shoshone, Ute, and Bannock hunted and fished in the broad valley and often camped along the lakeshore. Eventually, they began trading with other tribes and with mountain men who began frequenting Bear Lake in the 1800s.

Many of those mountain men were trappers. Those who worked for the North West Fur Company first came to what they called Black Bear Lake in 1818. About a decade later, the southern end of the lake, with shady cottonwoods and freshwater springs, became the site of the famed Bear Lake Rendezvous. During the summers of 1827 and 1828, thousands of hardy, buckskin-clad men, including notable figures like Jim Bridger, Jedediah Smith, and William Ashley, joined with Native Americans for weeks beside the lake at today’s Rendezvous Beach. They swapped stories, traded furs and supplies, sipped firewater, and indulged in dancing, singing, horse races, and gambling. So many campfires burned at night that one chronicler called it a “lighted city.”

Mountain man Phillip Covington later described the 1828 Rendezvous this way: “Plenty of fine horses; plenty of fine brandy and whiskey at $2.00 a pint or tin cup full; plenty of goods and groceries of almost every description. Horse racing and shooting were carried on to a considerable degree, while card playing and drinking was not neglected.” Sounds like a good time indeed.

Following the Oregon and California Trails

Bear Lake figured prominently in the great Western migration on the Oregon and California Trails. After the frenzy over beaver trading faded and the streams were eventually trapped out, emigrants began to head west in the 1840s in search of new opportunities to start over. The great trails, rolling 2,000 miles from the Missouri River to the Pacific Ocean, dipped into Bear Lake Valley in southeastern Idaho and followed the Bear River to Fort Hall. Less than 1,000 travelers trickled through the valley between 1841 and 1843, but that number soon swelled to more than 400,000 making the arduous journey by 1869.

Today, you can discover the rich history of the trails on the 111-mile Oregon Trail Bear Lake Scenic Byway. Start your exploration at the National Oregon/California Trail Interpretive Center in Montpelier, located at the site of the old Clover Creek Encampment. The drive offers 15 interpretive stops that bring trail history to life, including Sulphur Springs, Wagon Box Grave (where a family was killed by Shoshone in 1861), and deep trail ruts on Big Hill, the steepest descent on the entire Oregon Trail.

After the first Mormons settled beside the Great Salt Lake in 1847, the newcomers began exploring the area for fertile fields to grow crops and pastures for livestock. While thousands of migrants headed west through Bear Lake Valley, none of them stopped and planted roots. So in 1863 Mormon leader Brigham Young sent an initial contingent of Mormon settlers to Bear Lake, where they established Paris, the valley’s first community, after negotiating a peace treaty with the Shoshone tribe that left the southern part of the valley in their possession.

Settlers soon fanned across the valley, creating other towns along the edge of the lake, growing hay and grain, and running cattle and sheep across grassy meadows. Many historic buildings and sites remain from that pioneer era, including the sandstone-block Paris Tabernacle and the surrounding historic district in Paris. Other historic structures include a log cabin with a shingled roof built for Brigham Young’s 1870 visit to Paris, the Georgetown Relief Society Hall, and the restored buildings of Chesterfield, an 1879 Mormon village.

Located southeast of the lake in Randolph, Utah, the Wilford Woodruff home is another way to see a piece of the Mormon past. Woodruff was the fourth president of the Church of Jesus Christ of Latter-Day Saints, and in 1871 he and his wife Sarah bought a 20-acre farm here. The home was finished in 1872, and it was restored for visitors in 1992. Woodruff was a rigorous journal-keeper, and his writings help to preserve the history of the region. The home includes artifacts from the period—including Woodruff’s fishing pole—as well as information on life in the area around that time.

At 3:13 p.m. on August 13, 1896, after the 13th deposit was made at the Bank of Montpelier, Butch Cassidy and two accomplices held up the bank, cementing Bear Lake Valley’s place in the rough-and-tumble outlaw history of the Old West. The heist, carried out with William Ellsworth Lay and Henry Meeks, was the first bank robbery by Cassidy’s Wild Bunch gang—at the first bank in southeastern Idaho. It was a casual affair, with Meeks hanging with the horses outside while Lay held bank employees at gunpoint and Cassidy crammed a burlap sack with more than $7,000 in bills and coins.

The trio fled on horseback, “riding like the wind out of town.” Meeks was later caught and sentenced to 35 years in the Idaho Penitentiary, but the sentence was commuted in 1901 to 12 years. The bank building in Montpelier remains the only bank that Cassidy robbed that is still standing. It’s been restored to its 1890s grandeur and now houses the Butch Cassidy Museum, a must-stop attraction where you can see the original bank vault and walk the same floor that Cassidy once paced.

Echoes of Bear Lake Valley’s Past

The Bear Lake region is filled with special places that resound with the echoes of its historic past. In addition to boating and fishing on Bear Lake, hiking and biking along mountain trails, and watching the courtship dance of sandhill cranes at the national wildlife refuge, explore Bear Lake Valley and discover its respect for the past, unpretentious Western attitude, and emphasis on authenticity—values that sprang from the people fused to its land for centuries.

Written by Stewart Green for Matcha in partnership with Bear Lake CVB.