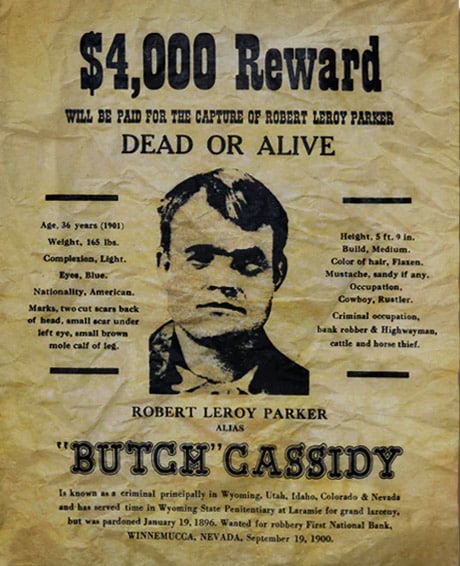 The above wanted poster is an example of what dogged Butch Cassidy all the days of his life . . . and beyond. Mock wanted posters are still available throughout the Bear Lake valley hoping for tourists to find Cassidy and finally bring him to justice! No one has proven once and for all what happened to Cassidy. Whether he died in Bolivia in a shoot out or returned to live out his days in the USA, it is sure that his infamous legacy lives on in the history of Bear Lake county.

“The Bank of Montpelier Robbery”

Montpelier had the first bank in southeastern Idaho. G.C. Gray established the Bank of Montpelier in 1891. It was chartered No. 1 of all Idaho banks when that step became necessary. . . . .According to Matt Warner in his biography, Cassidy robbed the Montpelier bank in an effort to get money to bail Warner out of jail. That has never been proven, but for a certainty Cassidy, Elza Lay and Bob Meeks robbed the bank, August 13, 1896. . . . .After a casual drink or two, they reached the bank just before closing time and tied up their horses at the hitching rack across the street from the bank. Cashier G.C. Gray had seen the men ride up, but paid little attention. He was standing on the steps of the bank talking with a friend, Ed Hoover. Cassidy and Lay left Meeks to tend the horses as they stepped across the street and ushered the surprised banker and his friend into the bank. There they forced the pay teller, A.N. Mackintosh and a girl stenographer up against the wall. Lay leaned across the writing desk and trained guns on the personnel while Cassidy quickly moved around scooping the money into a gunny sac. Mackintosh, with his face to the wall, was still able to look out of the window where he noticed the third man, Meeks, standing by the horses. He made an accurate mental note of the man just before he was struck across the face by Lay in an attempt to get him to tell where other moneys were located. It was his description that later resulted in the arrest and conviction of Meeks. . . . .Cassidy left the bank first with the money. He walked nonchalantly across the street, got on his horse and rode slowly away. Meeks moved across the street with the remaining horses and left Lay’s horse standing in front of the bank as he rode away. Finally Lay left the bank in haste.  As soon as Lay cleared the bank, pandemonium erupted as the alarm spread. Deputy Fred Cruikshank, first on a bicycle and then on his horse gave chase along with Attorney Bagley. Minutes later, Sheriff Jefferson Davis and a posse took up the chase. . . . .For a week the posse followed but gave up the chase near Snyder Basin. No one really knows what happened to the money or for that matter exactly where the men went. After his arrest later, Meeks swore that he never got a penny of the loot. . . . . Meeks was the only one ever arrested. Cassidy and Lay were never brought to trial. . . . .Mackintosh. . . . . stated: The 13th was the cause of it all. He noted it was the 13th day of the month; it occurred after the 13th deposit had been made that day at a sum of $13.00 and occurred at 13 minutes after the hour of 3:00 p.m.

Residents of Bear Lake county have discussed the Butch Cassidy bank robbery for years with varied endings. Not unlike fishermen’s boastings, tales of the exact amount of Butch’s loot will be haggled over for years. Besides Butch’s notorious Montpelier heist, it is interesting to note the other contributions that the “Bank of Montpelier” lent to the Bear Lake history. “The Bank of Montpelier” was established a centennial ago in April 1891 with G.C. Gray at the helm. (Present day mortuary owner Leonard Matthews actually owns one of Mr. Gray’s suits and wears it during performances of the robbery re-enactment when held.) The bank received the first Idaho state charter and opened doors in the building that Mountain Litho presently occupies. The bank built a brick building in the early 1900’s, which is presently occupied by Zions Bank. Severe financial problems arose in the 1920’s which closed its doors, forcing the need for immediate alternative banking. After many months and several meetings, the Eccles-Browning Bank based in Ogden, Utah opened for business at the same brick building in August 1925. Eccles-Browning Bank later changed its name to First Security Bank of Montpelier. The new bank continued to use the first charter of the state of Idaho throughout the 1930’s until the First Security banking system received a national charter. When First Security Bank vacated the building for its newly constructed office in February 1963, Tri-State Bank & Trust began banking operations in the building until it sold to Zions Bank in 1997. It is now the Butch Cassidy Museum. Presently, Montpelier enjoys the services of four banks: Wells Fargo Bank (formerly First Security Bank), U.S. Bank, Ireland Bank, and finally Zions Bank which continues to occupy the building. Although Butch probably will be best known for making the “Bank of Montpelier” notable, Montpelier’s first bank continues to have a profound impact on Bear Lake’s banking history.

The above image is a “Bank of Montpelier” check for an account for Lavar Nield circa 1910. Image courtesy of grandson, D.K. Parker.
. 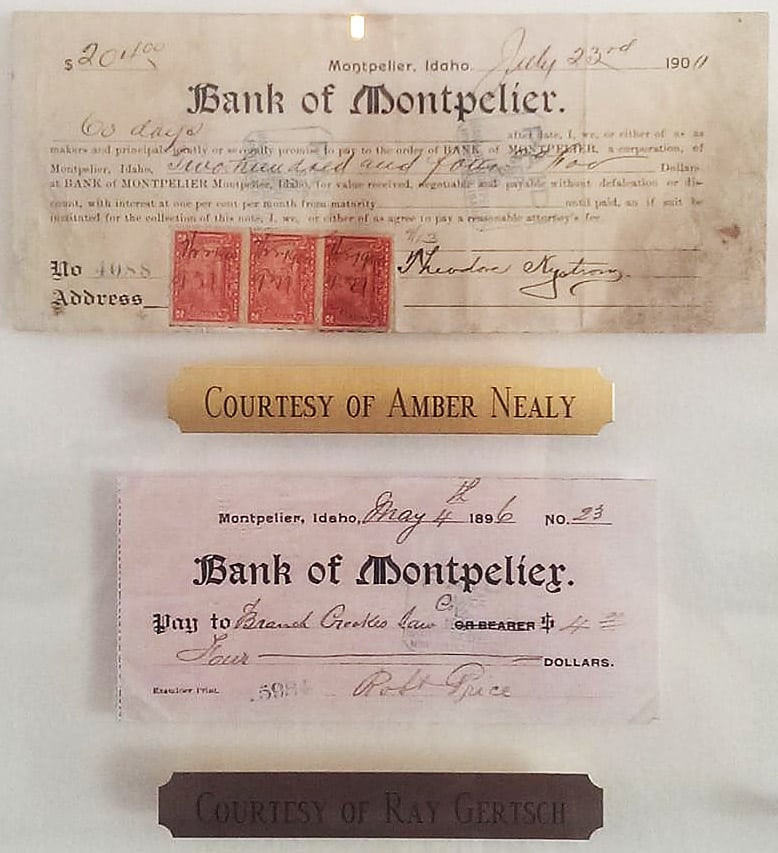 The above postmark was used to commemorate mail at the Montpelier United States Post Office during the centennial re-enactment of the Butch Cassidy Bank Robbery on August 13, 1996.

Built by the “Bank Of Montpelier” at the turn of the 20th century, the building was also home to Eccles-Browning Bank / First Security Bank (37 years), Tri-State Bank & Trust (34 years), and most recently Zions Bank. This picture was taken circa 1950’s.

The above building housed the original “Bank of Montpelier” and is the site of the infamous Butch Cassidy bank robbery. The building is now occupied by a the Butch Cassidy Museum.