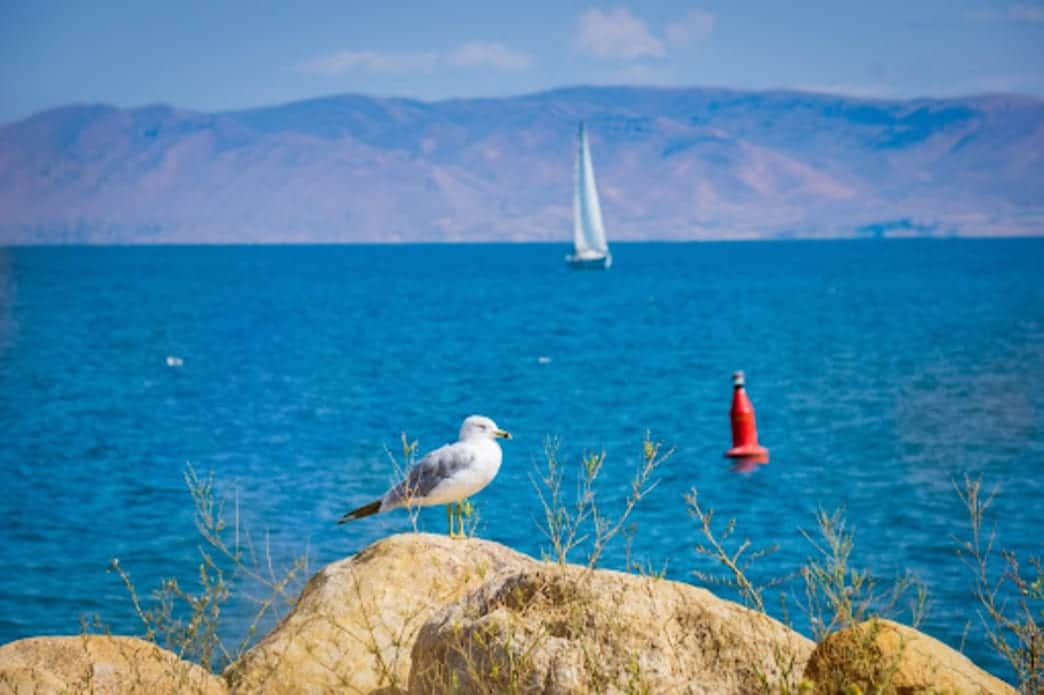 From rough & tumble outlaws, to trailblazing pioneers, Bear Lake Valley is home to hundreds of years of fascinating history

Bear Lake—a shimmering, turquoise gem straddling the Idaho and Utah border—resounds with a vibrant history that stretches back 12,000 years to the first inhabitants of North America.

Between those ancient roots and now, Bear Lake boasts a legacy defined by historic sites and places that evoke a famed mountain man rendezvous, the trail of emigrants to Oregon and the California Gold Rush, Mormon pioneer settlements, and a trio of desperados robbing the Montpelier bank.

When you roam the byways and backroads around Bear Lake, you discover that its rich past was determined by a rough landscape of mountains, valleys, and rivers and a host of hardy pioneers.

Here are a few of the special places that still echo Bear Lake’s rich human history.

Early Native Americans roamed the Bear Lake Valley for thousands of years, camping along the shores of the great blue lake, catching fish, hunting game, and gathering edible plants in the marshes north of the lake. The Ancestral Puebloans from southern Utah lived in the valley over a thousand years ago, growing squash, corn, and beans, and trading with other settlements along the Great Salt Lake. Historic tribes, including the Bannock, Ute, and Shoshone, found rich hunting and fishing like their forebears, living seasonally in the valley, and camping along the lakeshore.

The first Bear Lake inhabitants left few remains, but their legend of the “Bear Lake Monster” lives on. The native people told settlers of a great serpent-like creature with short legs that swam about the lake. Later accounts in the 1860s bolstered the myth and even still the monster is occasionally spotted.

Rendezvous Beach stretches along the south coast of Bear Lake with a broad expanse of sand that’s perfect for sunning and sandcastles, and nearby campgrounds with lakeside views. This playground, however, was once the scene of gambling, horse races, dancing, singing, and hundreds of mountain men.

The beach, with shady cottonwoods and plenty of elbow room, was picked as the site for the famous Bear Lake Rendezvous in 1827 and 1828 when trappers, mountain men, Native Americans, and traders converged on the lakeshore to swap goods, tell lies, and drink “medicine water.”

By all accounts, a good time was had by the leather-clad mountain men and native peoples, including the Shoshone, Crow, Nez Perce, and Flathead tribes. Stop by Rendezvous Beach for a walk along the lake and imagine those raucous gatherings with a thousand campfires twinkling under star-lit skies.

Blazed by missionaries and fur traders, the Oregon Trail spanned the American West in the mid-19th century, allowing thousands of emigrants to trek to the promised land in Oregon Territory or cut south to the rich goldfields in California. The pioneers first crossed the Bear Lake Valley in 1841, dropping through today’s town of Border before bending north along the Bear River, stopping to camp along Montpelier Creek or pick up supplies at “Peg Leg” Smith’s trading post near Dingle.

You can explore those covered wagon days on the Oregon Trail-Bear Lake Scenic Byway, a 111-mile route that passes 15 stops that interpret the trail’s history. Start in Montpelier at the National Oregon/California Interpretive Center to get acquainted with the westward movement. The center offers living history programs, a simulated wagon train ride, and old wagon ruts.

The first Mormon settlers arrived at Bear Lake Valley in 1863, making peace with the local Shoshone tribe to settle in the southern end of the fertile valley and establishing Paris, the valley’s first town. While life was hard, the settlers planted crops, grew hay, and raised cattle and sheep in pastures that grew grass as tall as a man. These industrious pioneers soon built more communities like Bern, Geneva, and Georgetown, with wide tree-lined streets and thriving businesses.

The Bear Lake area offers plenty of historic sites that recall those early days. For an overview, start in Paris at a log cabin erected for Brigham Young when he visited in 1870; the Paris Historical Museum filled with local artifacts; and the Paris Historic District and Tabernacle, the area’s premier historic landmark. Then visit the Wilford Woodruff Home in Randolph, the former two-room cabin of a prominent church leader that’s frozen in time; Chesterfield, an 1879 Mormon village; and the Georgetown Relief Society Hall.

Head up to Montpelier, named by Brigham Young for the capital of his home state of Vermont, to see the Bear Lake Valley’s most famous building—The Bank of Montpelier. The unassuming building was Idaho’s first chartered bank in 1891 and five years later was robbed by the famous desperado Butch Cassidy and two compatriots.

Butch and William Lay held up the bank on August 13 at 3:13 in the afternoon, while Henry Meeks watched the horses out front. While Lay held the tellers at gunpoint, Cassidy stuffed $7,165 into a burlap bag before fleeing the scene.

The bank was Cassidy’s first bank robbery, and the building is the only bank robbed by Cassidy that’s still standing. Now it’s been converted into the Butch Cassidy Museum. Step inside and creak across the same planks Butch walked on and peer into the original bank vault. You can witness a reenactment of the infamous heist if you visit on the Saturday closest to August 13 every summer.

Written by Matcha in partnership with Bear Lake CVB.