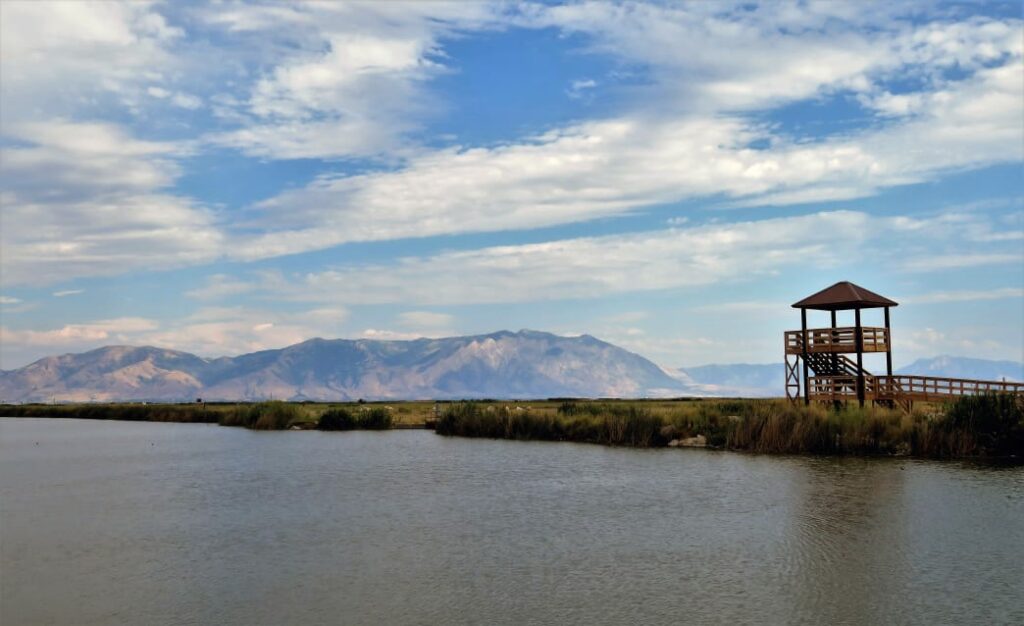 Sandwiched between mountain ranges, the gorgeous Bear Lake National Wildlife Refuge stretches for almost 18,000 acres across the Idaho and Utah border near Montpelier, Idaho. This wild sanctuary safeguards the crucial habitats that native birds and animals need to survive, free from human development. That said, it is possible to visit the refuge and see the incredible diversity of birds that make Bear Lake a bucket-list destination for avian enthusiasts and wildlife photographers. While known best for its birdlife, Bear Lake is filled with other animal attractions as well, including moose and other large mammals. It’s a special place that highlights and maintains a natural environment, something to be mindful of as you explore the refuge. Here’s what you need to know to make the most of your trip.

The Best Seasons to Visit the Refuge

Mid-April through mid-October is generally considered the best time to visit the sanctuary, with thousands of nesting birds feeding on the marshland. In May and June, the refuge sings with a chorus of bird voices and the flap of wings overhead as parents feed the hungry young birds. The refuge quiets in August as birds prepare to leave their summer home after rearing their youngsters. With warm, sunny days, September and October are busy with feeding birds before they fly south. Winter is Bear Lake’s quiet time. Snow shrouds the landscape and ice encases ponds and marshes. Hawks and eagles soar overhead, while cross-country skiers and snowshoers can explore the refuge roads.

The Bear Lake refuge is one of the most extensive wetlands in the Rocky Mountains. The undisturbed Dingle Swamp, sometimes called the Dingle Marsh, covers most of the refuge, providing ideal habitat for a wide variety of birds. The rich wetland is an important nesting, feeding, and resting area, especially for migrating waterfowl, including Canada geese, greater sandhill cranes, a variety of ducks, and shorebirds. In all, you can expect to find more than 160 species living in the network of sloughs, marshes, meadows, mud flats, and brushy slopes. (You can find a list, along with the best time of the year to see them, here.)

It’s easy to spot the big populations of nesting Canada geese, mallards, and redhead ducks, as well as colonial breeders like white-faced ibis, California and Franklin’s gulls, cormorants, terns, snowy egrets, black-crowned night herons, great blue herons, and grebes. The Trumpeter swan, facing extinction a hundred years ago, is now beginning to nest at the refuge. Look for these avian giants, with an eight-foot wingspan, sitting on nests built atop muskrat lodges.

While many species are spotted year-round, the most productive time to watch birds is during the busy spring and fall migrations when as many as 100 species can be seen in a day. In the spring, watch a pair of majestic long-legged sandhill cranes do their passionate courtship dance in open fields. In May and June, the baby goslings and redhead ducklings parade around open water safe from predators, while the largest colony of white-faced ibis in Idaho sets up housekeeping in the refuge. Other nesting species include great blue heron, snowy and cattle egrets, more than 4,000 pairs of Franklin’s Gulls, and three species of terns.

In the autumn the refuge becomes the spectacular staging area for as many as 500 migrating sandhill cranes, along with thousands of shorebirds and waterfowl heading south for the winter. By mid-October, only waterfowl species remain at the refuge, and they flee in November when the marshes ice over, leaving only raptors, ravens, and magpies to brave the cold winter. Visit the refuge in January to see occasional bald eagles roosting in trees and fishing in open water.

Bear Lake National Wildlife Refuge also provides habitat for mammals, amphibians, and reptiles (see a full list here). Moose graze on willows in shallow water and on the edge of the wetlands, while mule deer forage in the sagebrush highlands on the east side of the refuge. Other mammals sighted include red fox, coyote, raccoon, skunk, mink, and the fleet-footed pronghorn. The area is critical habitat for amphibians like the Great Basin spadefoot, leopard frog, tiger salamander, and Woodhouse’s toad. A few reptiles roam the preserve, including the Great Basin rattlesnake, garter snake, striped whipsnake, and sagebrush lizard, but they are rarely seen.

About half of the wildlife refuge is closed to any exploration, including the western half and the southern part of Mud Lake north of Bear Lake. This is to protect nesting birds from human disturbance. The Rainbow and Salt Meadows Units on the east side of the refuge are seasonally open for visitation, wildlife study, limited hunting, and boating. The best way to see wildlife is by driving into the refuge from the north and following the Wildlife Observation Route through the Salt Meadows Unit and then heading south to a spectacular wetland in the northern Rainbow Unit. The auto tour passes several marshes and ponds teeming with birds. A couple of spur roads head south from the main route to lush ponds and wildlife blinds reached by short trails. All the public roads are also open for hiking. A quiet way to discover wildlife is by paddling narrow channels on the Canoe Trail near the road in the Rainbow Unit.

Bring binoculars or a spotting scope to get up close and personal with the wildlife without disturbing them. Using a bird field guide helps to identify different species that you can check off your life list. Whether you’re a seasoned photographer or an Instagrammer, bring a long lens (like a 300mm) to shoot behavior shots and bird portraits as well as a big memory card to store your photos. Use insect repellent in the summer and bring plenty of water. You’ll see more wildlife if you stay in your vehicle while exploring the refuge since animals and birds are accustomed to cars but not humans. Usually, they flee as soon as you step out of the vehicle.

Bear Lake National Wildlife Refuge is a place for nature study and quiet activities, rather than a recreational playground. Besides touring by car or taking short hikes, you can pedal a mountain bike on the open roads or ride a horse on specific roads and trails. Ask at the refuge visitor center for details.

An accessible hiking trail for wheelchair users is open from mid-March until mid-September. Besides the seasonal Canoe Trail, boating is limited to designated areas from mid-September until mid-January during hunting seasons. Anglers occasionally toss their lines in the area north of Lifton Pumping Station and in the northern Outlet Canal, but the refuge recommends heading to Bear Lake or mountain creeks for better fishing for the Bonneville cutthroat trout.
Snow closes most of the refuge’s roads in winter, but that makes it a good place for Nordic skiers and snowshoers to follow the designated roads and trails that allow hiking. Dogs are allowed on the refuge but must be leashed.

No matter when you come, there’s something amazing to see. Take advantage of this refuge to see for yourself the diversity of life that calls this scenic outpost home.

Written by Stewart Green for Matcha in partnership with Bear Lake CVB.